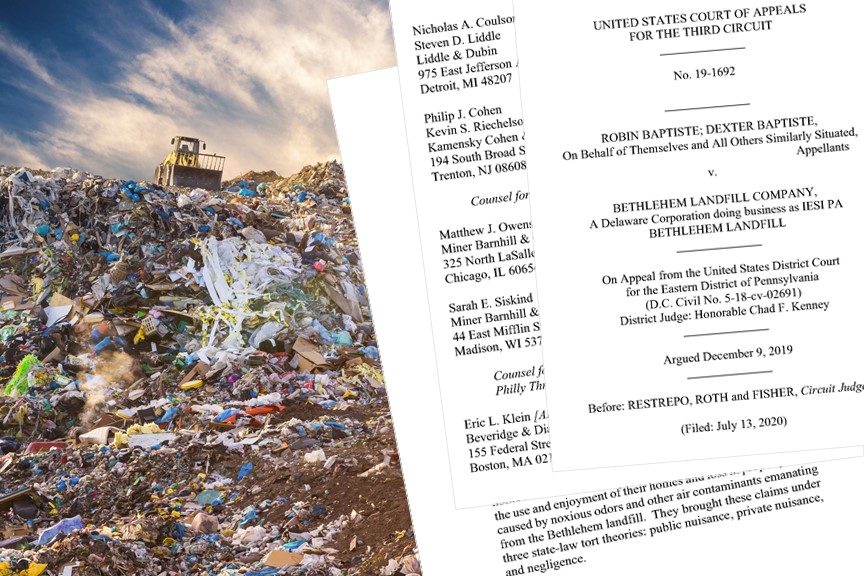 MBG attorneys Sarah Siskind and Matthew Owens had filed an Amici Curiae brief for the Public Interest Law Center (“PILC”) and Philly Thrive to draw the Court’s attention to the importance of private nuisance and negligence class actions for resisting the impacts of industrial pollution on low-income and minority communities.

The Court’s decision revives a common law nuisance and negligence class action brought by Freemansburg, PA residents against a neighboring landfill, claiming that noxious odors from the landfill were reducing their ability to use and enjoy their properties.  The lower court had dismissed the nuisance claims because they covered “too many” people, and the negligence claims on the ground that the landfill had no legal duty to avoid harming the community.  In reversing, the Court recognized the viability of nuisance class actions on behalf of large, geographically-defined classes as vehicles for fighting industrial pollution; and it ruled, with respect to negligence, that industrial polluters have a common-law duty to operate in a manner that avoids unreasonable risk to their neighbors.

The Court also noted the environmental justice concerns raised by the Amici.  It observed that the Baptiste residents’ community had been designated an “environmental justice area” by the Pennsylvania Department of Environmental Protection.  And it agreed with the Amici that “recent studies have shown that environmental pollution, including from landfills, has a disparate impact on racial-ethnic minorities and low-income communities,” that “environmental laws remained underenforced in those communities,” and therefore that private rights of action to challenge pollution are of “greater importance to historically underrepresented communities whose interests are not always fully addressed by public agencies or through political process.”

Over the last decade, MBG’s environmental practice group has been representing not-for-profit organizations, community groups, and small property owners and renters against corporate polluters throughout the Midwest.

PILC, a not-for-profit organization based in Philadelphia, uses high-impact legal strategies to advance the civil, social, and economic rights of communities facing discrimination, inequality, and poverty.

A copy of the opinion may be accessed here.