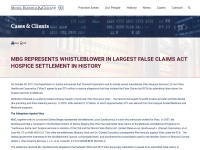 On October 30, 2017, the Department of Justice announced that Chemed Corporation and its wholly-owned subsidiaries Vitas Hospice Services LLC and Vitas Healthcare Corporation (“Vitas”) agreed to pay $75 million to resolve allegations that they violated the False Claims Act (FCA) by submitting false claims for hospice services to Medicare.

Defendant Chemed is a publicly traded company based in Cincinnati, Ohio that owns Vitas – the nation’s the largest for-profit hospice provider and Roto-Rooter (the plumbing and drain-cleaning service).  In 2016, Vitas earned $1.12 billion, of which approximately 97% was derived from the taxpayer funded Medicare and Medicaid programs.

The Allegations Against Vitas

MBG, together with its co-counsel Sidney Berger, represented whistleblower Laura Spottiswood, a nurse who previously worked for Vitas.  In 2007, Ms. Spottiswood filed a complaint in the Northern District of Illinois alleging that Vitas had submitted false claims to the Medicare and Medicaid Programs for “continuous home care” hospice services in violation of the FCA and the Illinois False Claims Act. (United States ex rel. Spottiswood v. Chemed Corporation, et al., Case No. 07-cv-4566 (N.D.Ill.))  Two other whistleblowers (Barbara Urick and Dr. Charles Gonzales) subsequently filed lawsuits against Vitas under the FCA.  The federal government intervened in the whistleblowers’ lawsuit, consolidated them, and transferred the consolidated cases to the Western District of Missouri (United States v. Vitas Hospice Services, L.L.C., et al., Case No. 4:13-CV-00449-BCW (W.D.Mo.)).

The settlement resolved Ms. Spottiswood’s allegations that between 2002 and 2013 Vitas knowingly submitted or caused to be submitted false claims to Medicare for continuous home care—one of four levels of hospice care covered by Medicaid services—that were not necessary, not actually provided, or not performed in accordance with Medicare requirements.  Continuous home care services are to be provided only for patients who are experiencing acute medical symptoms causing a brief period of crisis, and hospice providers are paid hundreds of dollars more by Medicare on a daily basis for each patient they certify as having received continuous home care services rather than routine hospice.  According to the allegations, Vitas set goals for the number of continuous home care days billed to Medicare and used aggressive marketing tactics and pressured staff to increase the volume of continuous home care claims, without regard to whether the patients actually required this level of crisis care.

The settlement also resolved allegations advanced by the other whistleblowers that between 2002 and 2013 Vitas knowingly submitted or caused to be submitted false claims to Medicare for services to hospice patients who were not terminally ill and therefore did not qualify for hospice.

The claims resolved by this settlement were allegations only; there was no determination of liability.

Under the False Claims Act, Ms. Spottiswood and her fellow whistleblowers received a relators’ share award of 21.5% of the $75 million settlement ($16,125,000 plus accrued interest) for their role in filing their lawsuits against Vitas and actively assisting the Department of Justice in prosecuting the claims.

After the United States intervened and took over the prosecution of her federal claim, Ms. Spottiswood filed a complaint in the Circuit Court of Cook County, Illinois alleging that Vitas had similarly submitted false claims for continuous care hospice services to Illinois’ Medicaid Program in violation of the Illinois False Claims Act (State of Illinois ex rel. Spottiswood v. Chemed Corporation, et al., Civil Action No. 14 L 2786 (Cir. Ct. Cook County).  Vitas agreed to pay the State of Illinois $500,000 to resolve the allegations in Ms. Spottiswood’s complaint, of which Ms. Spottiswood received a relator’s share award of 27.5% ($137,500 plus accrued interest) for her role in filing her lawsuit against Vitas and actively prosecuting her claim.  To date, the State of Illinois is the only state to recover from Vitas for the submission of false Medicaid claims.

The claims resolved by this settlement were allegations only; there was no determination of liability.

MBG routinely partners with co-counsel in evaluating and litigating cases under the FCA and welcomes such opportunities.  This settlement with Vitas is one of many FCA cases in which MBG lawyers have served as counsel or co-counsel.  MBG has, for decades, represented whistleblowers by filing lawsuits on behalf of the government against entities whose fraud has cheated the government and taxpayers.  MBG has recovered tens of millions taxpayer dollars to compensate the government for fraudulent practices across various segments of the health care industry as well as numerous other industries.

MBG thanks and congratulates all entities whose hard work led to this record-breaking settlement, including its co-counsel Sidney Berger, the attorneys from the Commercial Litigation Branch of the Department of Justice’s Civil Division, the U.S. Attorney’s Office for the Western District of Missouri, the Department of Health and Human Services Office of the Inspector General’s Office, the Illinois Attorney General’s Office, and Ms. Spottiswood’s fellow whistleblowers, Barbara Urick and Charles Gonzales, and their counsel.