The University of Michigan Law School has announced the formation of a new scholarship fund endowed in the name of MBG’s co-founder and current Of Counsel attorney Chuck Barnhill. The fund’s endowment is based on a former client’s admiration and regard for Chuck, including his work on a matter that was ultimately resolved by the U.S. Supreme Court. The victory in the Supreme Court established the principle that federal employees are entitled to a full hearing at some point in the discharge process.

“Chuck is the type of lawyer who should be held up as an example of how lawyers and the legal system should work,” says Wayne Kennedy, who, with his wife Lorelei, has made the gift to endow the Charles Barnhill, Jr., Scholarshrp Fund at Michigan Law. “l hope that the students who receive scholarships through the fund will be inspired by him, because Lorelei and I have always admired hìm.” 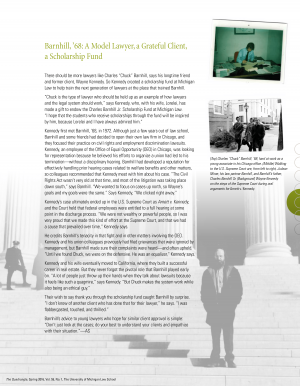